Photograph 1. The two lime trees on the left are designated for removal in the planning application. 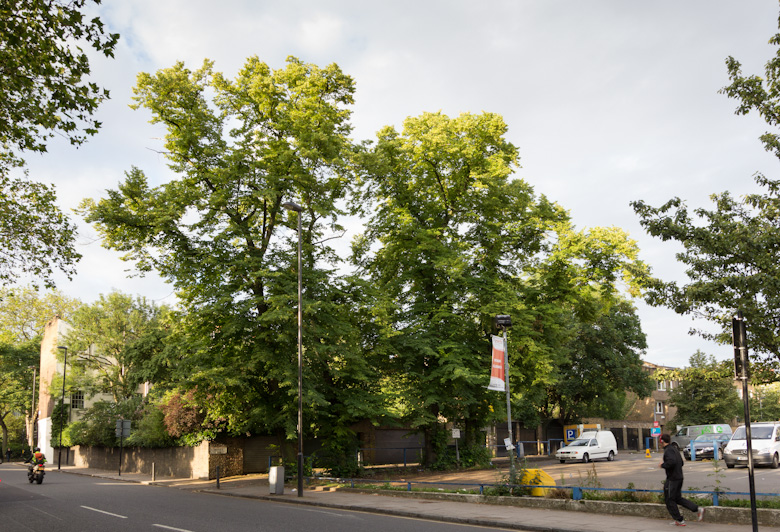 A new development at 85 Canonbury Road, Islington, N1 is the subject of the objection on this page. It concerns Planning Application No. P121277 to Islington council, and objections are now due by 26th July, 2012. They may be emailed to planning@islington.gov.uk, quoting the Application Number. Application documents are available online at Islington's website planning section.

The objection I have made is as follows.

These three trees do not fit within the British Standard’s description of Category 'C' trees, although that category has been ascribed to them in the Tree Survey Schedule. Category 'C' is described by BS5837:2005 as “Trees of low quality with an estimated remaining life of at least 10 years, or young trees with a stem diameter below 150 mm”. However, all three trees are of a stem diameter of 150 mm or more. They are well grown, well established and should be regarded as the trees of the future at this location. Their useful life expectancy is greater than 40 years and they have no significant defects. They complement, at this end of Edwards Cottages, the mature lime trees at the Canonbury Road end. As the years go by their link to the older trees will become more firmly established and will add significantly to the landscape. There is no reason why these trees should not be categorised as 'A', even though they are relatively young trees. The BS expects the highest possible categorisation.

If trees of this quality, growing at the very edge of a development site, cannot be protected and retained I see no proper future for trees at development sites. It seems to me that the present application flies in the face of two recent publications that argue the role of trees in construction, Trees in the Townscape by the Trees and Design Action Group, and The benefits of large species trees in urban landscapes: a costing, design and management guide published by CIRIA. Both these publications are produced by or with the full support of the construction industry and both express the value to all parties, including particularly to developers, of retaining and planting large species trees. Here, at 85 Canonbury Road, we have a case of such large species trees being designated for felling. They are shown in Photographs 1 above and 2 below.

Trees Nos. 2 and 3 should be retained. 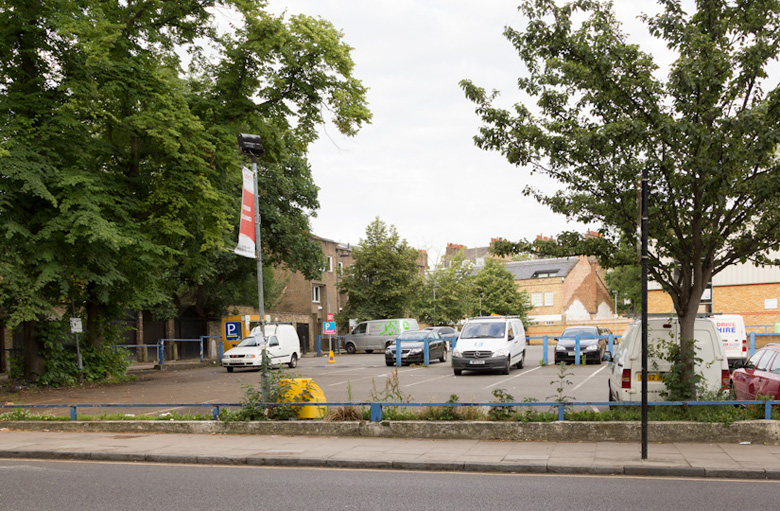 Photograph 2. The three immature lime trees shown in the context of the mature limes on the left.

This tree, showing on the right of Photograph 2, is categorised as a ‘C’ tree. It appears to be in a structural condition that is better than “Fair” and its stem diameter is 230 mm, well above the ‘C’ designation. That it “Drops fruit on public pavement” is to be expected, as do very many other fruit trees planted on or near pavements in Islington. It is unexceptional in this regard. I find no reason to downgrade the tree; It should be in a higher BS Category.

The advantage to a developer of trees being categorised as ‘C’ is that they have minimal protection, unlike ‘A’ and ‘B’ trees. The apple, as the limes, should be re-categorised upwards.

This tree appears to be a public street tree. It is described as “Off-site tree” in the Schedule and designated for removal. I would regret the loss of this lime tree as it does make a worthwhile contribution as a foil to the plane and the horse chestnut. It does not, so far, interfere with its neighbouring plane tree and that it has internal decay is quite normal for elderly lime trees in Highbury, as those in Highbury Place attest. There is no evident reason to remove it and I would expect Islington’s Tree Service not to remove it given they have seen no reason to do so to date. Certainly, the developer should not remove it.

2.  Trees for retention and pruning.

I am satisfied with the arrangements for the plane trees along the Canonbury Road side of the site. The four lime trees, Nos. 9-12, are, however, of some concern when it comes to pruning, despite the area assigned for their continued growth. I am far from certain that the value of these trees is fully appreciated by the developer and this might be understandable to a degree given the arboricultural report was compiled from evidence taken in the winter months and that other documents appear to have been compiled without the advantage of images of these trees in spring and summer. Photograph 3 shows the summer appearance of the four trees on 5th July, 2012, and demonstrates the powerful impression given by this short line of mature trees. The characteristic form of the species is shown to advantage in this group. Such a group merits Category ‘A’.

What will be important to their continuing landscape contribution is that all four trees are given a maintenance regime that protects their form and that pruning does not strip the trees of lower branches, raise, reduce or thin their crowns or otherwise compromise their natural beauty.

The proposed scheme “seeks to retain” all four lime trees within the site that are growing along Edwards Cottages, (Arboricultural Implications Assessment and Method Statement). I ask the LPA to insist that all four trees are indeed retained and that the attention given to retaining and protecting the trees is close enough and firm enough to make this a reality. In case this seems to be an unnecessary comment, I am aware that in recent times trees have been lost or severely damaged on construction sites due to carelessness and inadequate respect for agreed tree protection arrangements when it comes to the implementation of a scheme.

Further, tree works that are claimed to be necessary could be more damaging physiologically or aesthetically than is really necessary. I ask that the LPA ensures its tree officers determine and direct such pruning requirements as they deem necessary and that they permit only the minimum of essential pruning, even to dead wood and epicormic growth.

Unfortunately, while none of the photographs presented with the Application documents shows the trees in leaf, neither have I found in any of the documents any suggestion of their historical/cultural significance. The Tree Schedule omits this, as does the Heritage Statement, though a line of trees, possibly these same trees, is recorded on the 1871 OS map at the corner of Canonbury Road and what was known then as Hydes Place, shown in Illustration 1. The Tree Schedule should be amended to show the importance of this aspect by adding sub-category 3 to their records. 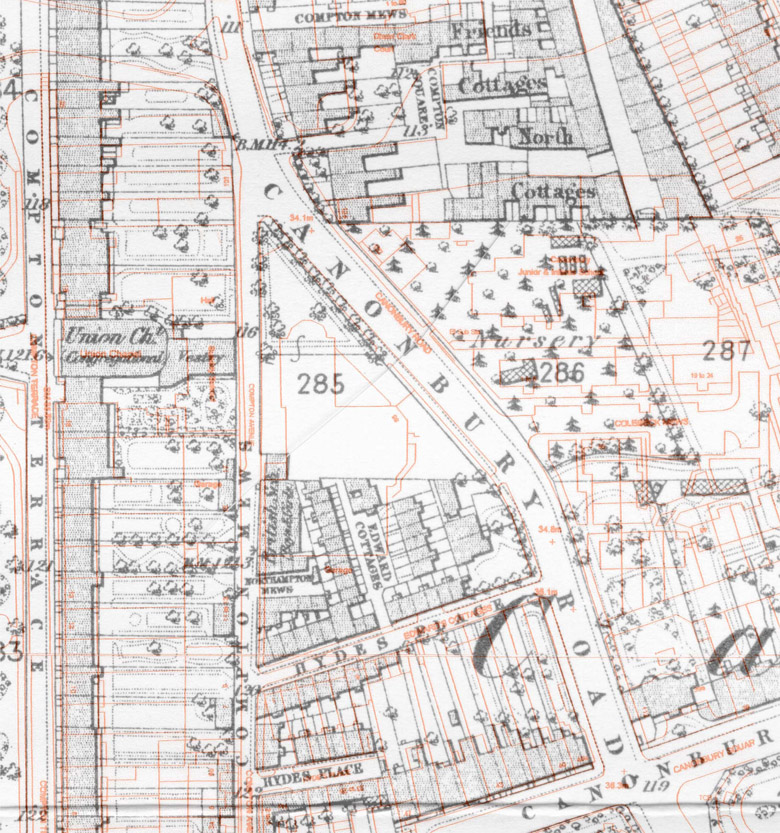 The arboricultural report has not taken the opportunity afforded by the BS additionally to schedule these trees as a group – nor, indeed, the line of planes along the Canonbury Road side of the site as a group. I feel this is an omission and that all these trees should have been categorised both as individuals and as groups because much of their power as landscape elements comes from their groupings. It makes the argument for the retention of the young lime trees the more telling, too.

Essentially, the existing trees, immature and mature, should be recognised by the developer as bringing considerable value to the new building and offering benefits to its occupants such that the best interests of the trees would be a prime objective for the development as a whole.

It is disappointing that no description of the landscaping of the central garden envisages at least one, large-growing species tree, such as plane or lime. It has become quite common for birch trees to be planted in such spaces but they are no substitute for the large species. Historically, inner London housing has been on a scale that is complemented by large trees and this development is on a comparable scale. It should be possible to plant such a tree in the central garden and to add more trees to the perimeter along Canonbury Road.