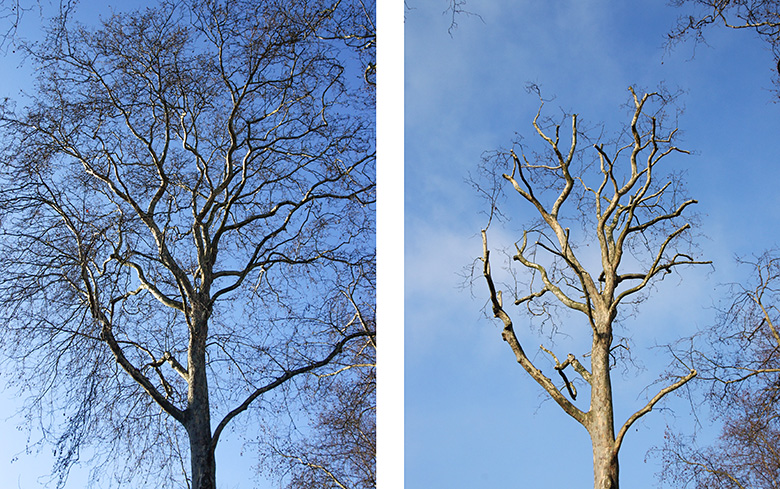 Before and after: one of six magnificent plane trees cut down in size at Highbury Fields, February, 2012.

Crown reduction is the term for cutting back the branches of the tree to limit the amount of foliage it produces. In the case of trees in the street, we are used to seeing the main area of a tree’s foliage, its crown, heavily pruned from the top, the sides and underneath; on balance, this reduction in height and spread is accepted and is usually better than removing the tree altogether ‒ although the re‐growth of London plane trees forms a much denser mass of foliage than would be found on naturally growing trees. As a consequence of a need to control the spread of a tree, a cycle of growth and further cut‐back raises a problem of appearances and the loss of natural beauty, rather than any threat to the life of the tree from such amputation.

In a park, however, our expectations are very different and the enjoyment of the natural forms of large, historic trees is taken for granted – until it is taken away by a turn of events. This article shows two very different, unexpected circumstances that have resulted in similar, unfortunate outcomes for the trees concerned.

The recent bold development of housing spanning the railway lines at Arundel Square, N7, and the related refurbishment of its central gardens, has been a great success for local people who now have a more attractive green open space that is clearly very popular. But during construction of the new housing, the roots of three large London plane trees were severely damaged such that it was seen necessary to cut back their branches to assist regeneration of the roots and to preserve their stability in strong wind. 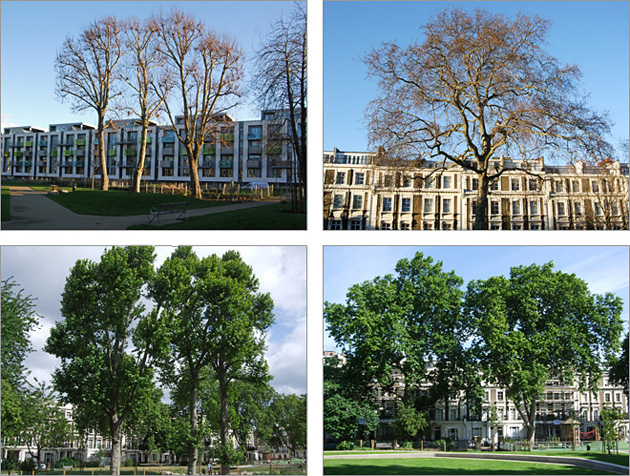 The trees remain a significant benefit to the park but have lost their grandeur and much of the natural beauty they formerly displayed – never to be regained because new growth cannot replace the gradual taper of branches that allows them to sway in the breeze as an organic whole. But, providing it is not trimmed back again, the new growth will not remain quite as broom‐like as it is at present. Fortunately, there are several other plane trees in this park that have splendid forms, and replacement walls and railings have been installed in a manner that should protect the root systems for a long time to come.

The moral of this story is that greater protection for trees is necessary where trees may be at risk from building works; no matter that the architect’s plans show the means for proper protection, enforcement of this good intention is essential throughout the duration of the works to prevent unnecessary damage and tree surgery when damage has been done.

The London plane trees at Highbury Fields, Islington’s largest public park, were planted in the 1880s, and are just a little younger than those at Arundel Square. There are many more of them, over two hundred trees, and they are of great interest as a group, not just because together they comprise the supreme arboricultural feature that ties the park together in a series of interlocking avenues, but because the collection has a uniquely rich variety of forms of this species.

Until this year, 2012, only one plane tree, found to be somewhat ailing, had had its topmost branches slightly reduced to refresh its vitality. In February, however, behind Baalbec Road, five of a row of trees comprising six large planes, among the best specimens in the park, had their crowns cut back by forty percent, and the sixth tree was felled. The lopped branches will continue to be cut back on a three‐year cycle. The reason: the threat to nearby buildings in Baalbec Road. Highbury Fields has thus lost, for ever, the quality of magnificence these trees have displayed for all of us, and their crowns in summer will become just so many large blobs of green on massive columns. 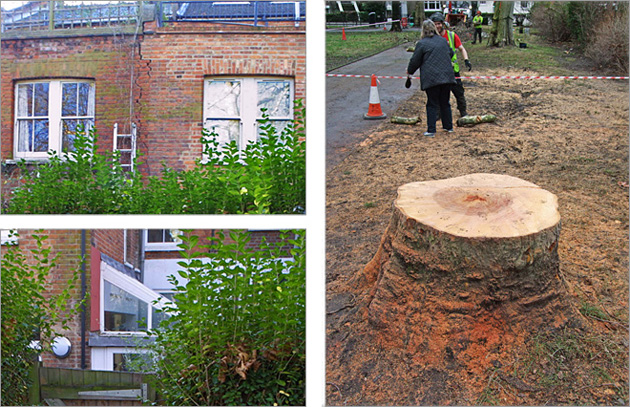 Problem and solution: the loss of a fine tree that had been growing near the building showing the crack.

Given the evidence and the state of the law, Islington’s tree service had little option but to take this action but that doesn’t mean it is any less of a loss to the community as a whole or that we should not strive to prevent further such losses in the near future, wherever they may occur. 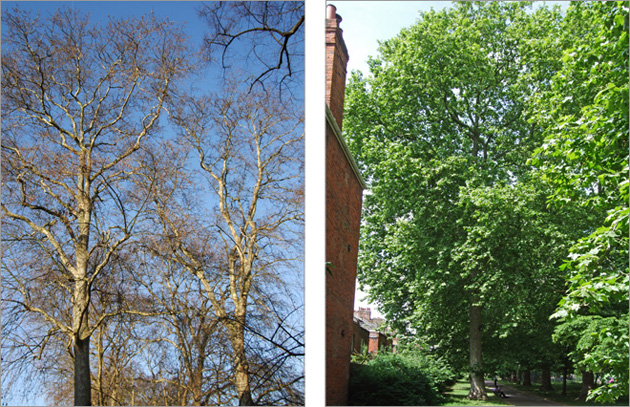 Plane trees behind Baalbec Road, winter and summer, before the left hand side of the avenue was

Where do we go from here?

In 2007, The London Assembly Environment Committee published Chainsaw massacre: a review of London’s street trees, addressing many of the issues with London’s disappearing trees, “London has been losing its mature broad leaf tree stock, due largely to trends and practices to plant smaller trees which are easier and cheaper to maintain, limited budgets, subsidence claims from the insurance industry and a failure of the general public to support the extensive benefits of street trees. […] The insurance industry must provide better quality investigations, ensuring that accurate and reliable tests are used in order to provide evidence showing that a tree is causing subsidence damage to a property. If they cannot provide the required evidence then they should not be requesting that the local authority remove the tree in question. […] Our report calls for a broadleaf tree planting strategy across London to help replace those native species we are losing, such as plane, lime and oak.”

To be clear about one of these issues; it is not the case in Islington that trees are removed without evidence but, while such evidence may be assessed as being sufficient to satisfy a court that the tree must go, or be heavily reduced, and that the guardian of these public trees, the local authority, must be responsible for removing the problem, does that evidence also satisfy local people that felling a tree, or severely reducing its height and blighting its appearance, is the proper, the best or the only option? Chainsaw massacre appears to be calling the public to display a more robust approach in defending its trees.

Do we need, for the sake of the environment and the amenity benefits that trees bring to the community, a change in the balance between trees and buildings? The current approach seems to side wholly with the building against the future of the tree and the quality of the urban landscape as a whole. If we believe there should be a re‐balancing of interests, how might this be brought about?

Different solutions are needed: long‐term changes to the climate are bringing a less stable water supply, either substantially reduced total rainfall or years interspersed with long periods of dry weather. Both a warming climate and a growing population in Great Britain are adding to the already disturbing demand for water. We are not as safe as we once were.

The responsible use of water is key to resolving the difficulties. Much water is wasted running into drains: in some new developments, cisterns are being installed to harvest water for future use; prevention of run‐off through the installation of porous surfaces could be considered wherever appropriate. Much of a local park such as Highbury Fields is covered in tarmac which might be replaced with a variety of porous surfaces – it’s not just at new developments that local authorities need to be addressing the issues – providing this did not give more access to roots for de‐icing salt in winter. Even rainwater pipes from houses might be re‐aligned to carry water to nearby trees, be they publicly or privately owned.

To ameliorate the problem further, amendments to building regulations, such that there is greater awareness and emphasis on house owners and insurance companies to perceive and respond to the needs of nearby trees in a dry present and even drier future, will be essential if trees are to prosper. Buildings need to be more fail‐safe; even in the smallest house alterations, where a steel beam may take over the load of a wall above, a weight may be transferred to a pillar that proves to have insufficient support because foundations are inadequate. Regulations need to be beefed‐up to take care of a future where significantly less rainfall may lead to significantly drier soil conditions and the significant shrinkage of soil under houses. Houses may well need underpinning regardless of trees; let politicians and the general public address this now, and save both trees and houses.