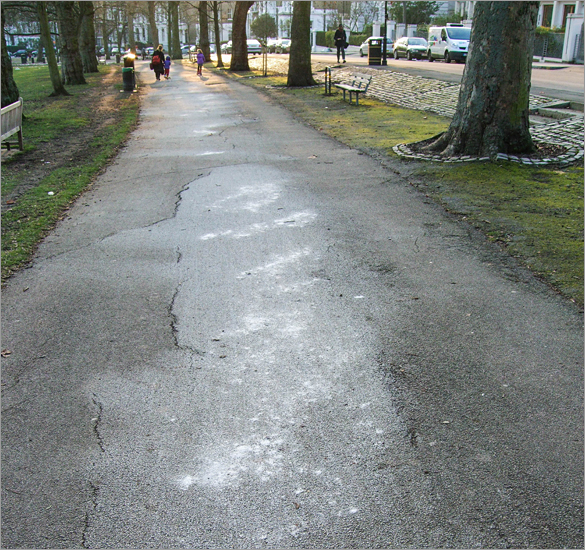 More salt is used in Britain for de-icing during winter than in any other European country, despite our having relatively little snow and ice. While it is effective in melting ice, salt has properties that cause long-term damage to trees and may even kill them. It is either splashed onto trees by passing vehicles or reaches the roots through runoff from roads and pavements.

In the photograph, the salt deposits on the park pathway will seep into the soil through cracks in the tarmac that have formed as a result of pressure from roots underneath, or will flow to the edge of the path during rain.

Roots form an underground lattice many metres in extent and cannot be avoided where salt is spread near the tree trunks or anywhere underneath the canopy. The roots will take up the salt which will be passed to the shoots. If damaged in this way, buds fail to open or leaves die back during their development. Whole branches may die, whole trees may die.

Most tree species are susceptible to salt damage; certainly the London plane, shown in the photograph, is one such species. Research shows that, across Western Europe, 700,000 trees were dying annually as a direct result of the use of de-icing salt during the 1970s. Although machinery for spreading salt has improved, hand spreading of salt is particularly prone to creating high concentrations of salt.

In this case, it seems a local resident has taken a decision to salt the pathway; the local council Greenspace team has no knowledge of the salting of the path. The outer pavement was clear and there was no necessity to put the trees at risk.

The Forestry Commission has published an eight-page advisory leaflet on the problem of salt used for de-icing, including a list of tree species most at risk: