For many years a great number of trees planted by local authorities in England have been sourced from nurseries in Holland. Information on where the Dutch came by the cuttings from which their trees were propagated is generally unavailable. In recent times, provenance has been becoming an issue, not least because of the global spread of pathogens and disease. Barcham Trees Ltd. has decided to propagate trees using cuttings from trees growing in this country. At the end of November, 2013, in association with Islington's Tree Service, Tom Wilson of Barcham Trees and his colleagues took a few hundred cuttings from London plane trees, Platanus x acerifolia, growing at Highbury Fields. The company is taking plane tree cuttings in other parts of London, too, in the expectation of having new London plane trees grown from London stock ready for planting in London’s streets and parks within 5-10 years, depending on the speed at which the tiny trees will grow.

Treetree has advocated this form of self-help for some time and it is most encouraging that we can expect to have a bank of young trees to replace mature trees that for one reason or another will be lost and to add to the plane tree forest that is London’s arboricultural pride. 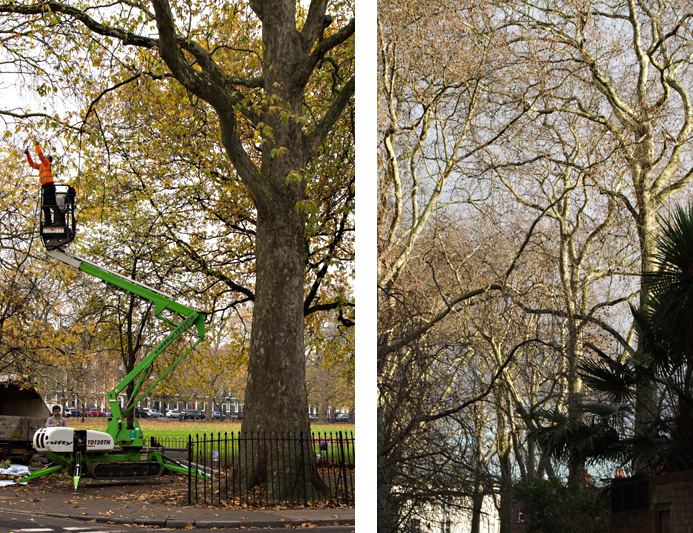 Taking cuttings from the lower hanging branches of one of the oldest planes at Highbury Fields, at the corner of Highbury Place and Highbury Crescent. Right hand photo: the line of fine trees behind Baalbec Road before they were heavily pruned, showing the plane on the far right which has provided many cuttings for propagation.

At Highbury Fields three trees were selected from which to take cuttings. One of the oldest trees on the site and the largest, dating perhaps from the early nineteenth century, was an obvious candidate and, though its new year’s growth is shorter than the younger trees, worthwhile cuttings were obtained.

A formerly magnificent tree at the rear of Baalbec Road that was severely reduced in size because it was held to be threatening the foundations of nearby houses, provided excellent cuttings from epicormic growth that had sprouted very swiftly following dramatic pruning; it is very pleasing that such potentially superb trees may be propagated from this specimen tree. 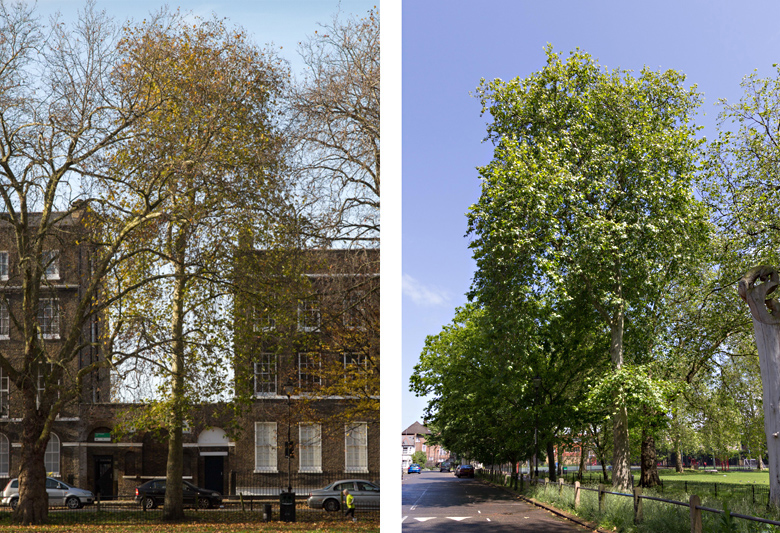 This year's winter photo showing the narrow-growing, pendulous foliage of the London plane beside Highbury Terrace; the summer picture shows its healthy crown and a burst of epicormic growth low on its stem from which cuttings were taken.

The third tree chosen, beside Highbury Terrace, is something of a rarity; its form is very compact and columnar, which Barcham’s think may be attractive to local councils for not having wide-spreading branches that can cause difficulty in the street scene; its branches are unusually pendulous and from this year’s experience it holds onto its leaves far longer than the general range of Platanus x acerifolia  growing at Highbury Fields.

None of these three trees is known to have suffered from massaria disease of planes that has been such a problem in London over the last three years and it is hoped that all three of them have some natural resistance to massaria that will carry through to the cuttings. 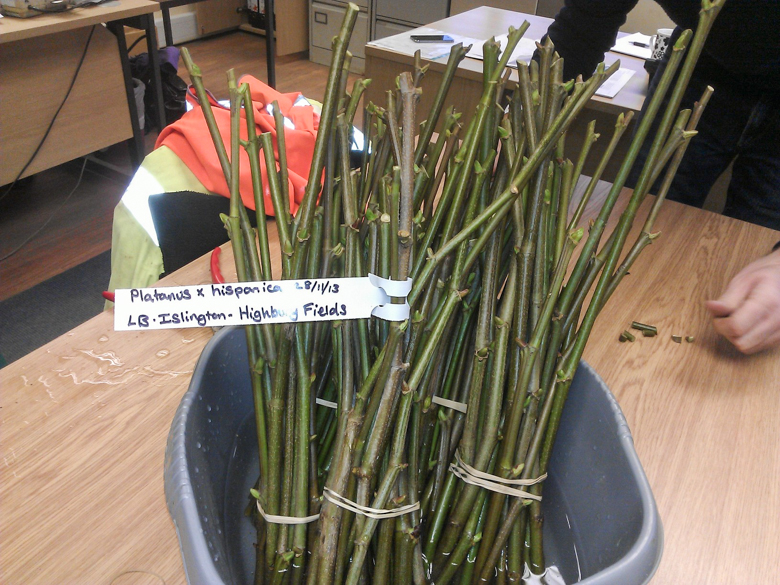 A group of cuttings trimmed and prepared for planting. Photo: Barcham Trees Ltd.